During the last couple of months we have had the opportunity to listen to some very exciting new products, one of them being Shunyata's new 'budget' speaker cable...the VENOM-X

This had always been the case until late in 2021 when Guillaume informed us of the new Venom-X speaker cable.
"Can we get some to audition" I asked,  to which Guillaume's reply was an apologetic 'NO!'

He had already loaned his only demonstration pair to a long established and very well respected hi-fi dealer in London. This dealer was SO impressed with the cables that they basically refused to return them as they wanted them as their own  permanent demonstration pair. They were not prepared to wait until the Venom-X was to be officially released early in 2022.

Well, with this in mind we just had to place a forward order for a 'demo' pair.
Late in January we received a Brand new set of the Venom-X cables (1 x 5 metre and 1 x 3 metre), so as soon as we were able we put them into our main demo room and compared them to our reference 'affordable' priced speaker cables.

As with most Shunyata products, we found the improvements to be subtle at first, allowing one to hear less noise! Noise that you didn't actually realise was there.....until it wasn't!
This makes listening a more enjoyable experience as instruments/vocals etc seem to be more solid somehow.
The old adage of 'blackness between the notes' is better understood using Shunyata cables, the Venom-X being no exception.

The biggest difference was going back to our normal demo speaker cable. The music sounded slightly 'muddled' by comparison, with a small hint of hardness......not brighter but harder somehow.
I won't go so far as harsh......but that description does come to mind. 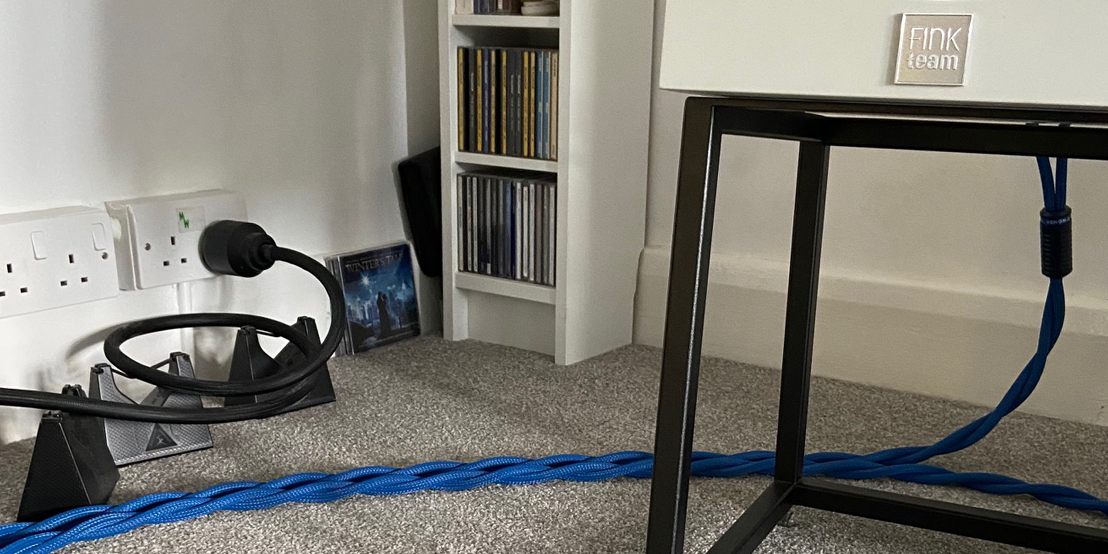 Anyway, that evening I took them home and put them into my own system in place of my cable that has served me well over the last few years.

At first the differences/improvements were small, or should I say subtle. My wife thought that they seemed to stifle the bass a little by comparison to what she experienced before.
I changed them back, after some listening, to my original cables, but decided that the improvements, albeit small, were worthwhile so the cable has stayed in place.

Now though, after several hours of running time on my system I most definitely could not go back to my original cables.
The bass has somehow 'filled out' but in a totally natural way.
Bass instruments appear to be able to achieve a new level of information somehow, enabling one to follow bass lines much more easily...and to understand the instruments more in some un-canny way.

The whole running in process has allowed this superb cable to really shine. Well, it has allowed the music to shine through even more than ever before.

The overall musical enjoyment has stepped up by a very agreeable amount.

So, how does this cable sound? In two words...It doesn't!

It just seems to 'get out of the way' better than Anything that I/we have heard at this price...and above!

On a much more practical note, the cable is very 'manageable'! Easy dress around speakers and furniture etc. The superb build quality is typical 'Shunyata'. The speaker plugs are a simple 4mm 'banana' type, but are a really good fit in to the amplifier and speaker sockets.......and, of course, it's Blue.

As one of our customers said about an amplifier purchase that he made some time ago...... "This is definitely a Keeper"!